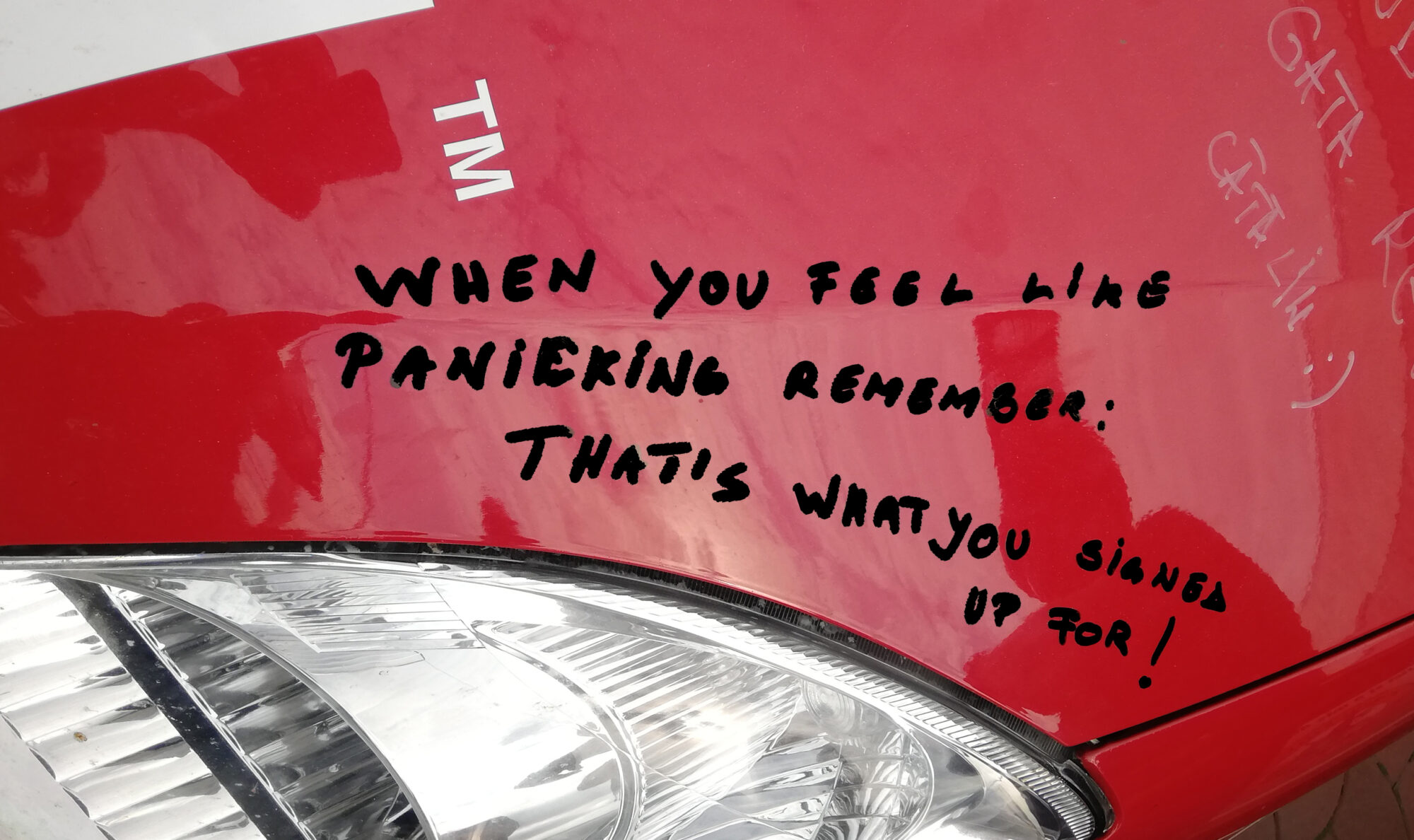 If you have followed my Mongol Rally stories then you know the context by now. Probably the most definitory trait was that although we named one of the teams “We are all Mongolians” our convoy nickname was actually “We are always late”. So I decided to tell the story of our most relevant “Time Management” example. This example starts in the middle of the night of course, with our entry in Tajikistan and reaching Dushanbe, but this time we were not alone, we were also convoying with two polish girls in a mighty Fiat Panda, that we have randomly met on the Uzbek highway. This actually helped as they could speak Russian and knew a place to stay for the night by talking on a different WhatsApp group. When we arrived there, it was so well known within the Mongol Rally circles that I actually recognized it from YouTube videos that I have seen from older teams. We managed to park the three little cars in a very small inside court, but soon after it felt like nothing as around other 5 or 6 rally cars managed to squeeze in. It was a small sea of rally cars… or maybe just a lake. The court of this hostel was a real Asian stereotype with the bed place put outside where you could eat or sleep with your hand down your pants as we have seen an example the next day, and a random weird goat tied up next to the cars but at the same time, the whole place was so welcoming that you would wish to stay a few more days there. We had a really pleasant night sharing beers and random stories from the road, although I don’t think we remember any of them now.

As mentioned before, I was doing the navigation and route. We all had some roles that we are best at, Vali was providing food and coffee during the day, Tudor was repairing the cars when needed (just the Suzuki…) and I was doing navigation because I am really good at orientation, I always know where North is and stuff like this. On this day I was trying to hurry the others a lot because I knew that we were heading for the first day in the Pamir Mountains. From what I knew it should be an easy first day but then again, we were talking about 4000+m high mountains with no tarmac. The Polish girls decided to stick with us in the convoy and for the administrative task of buying food and SIM cards. I was trying to save my energy so I actually decided to let the guys find a place where to buy SIM cards, Tudor said he found one nearby so we left the cars in the hostel and went on foot. The “nearby” place turned out to be around one hour walk from our hostel and when I realized we were zig-zag-ing to it I already started to get in what would be the mood of the day. On the streets, we could see a lot of police stops in traffic so we were mentally prepared for one.

After gaining our SIM cards but losing around 2 hours of daylight we decided to take the cars, stop to buy some food, and head out of the city. Although the small courtyard was having only three cars now, not eight, Vali managed to hit the Suzuki into the Sandero sparking an inevitable argue about exchanging insurances, something that still did not happen until this day. After this first emotional shock that the Suzuki went through we managed to get out and on our way. We went east and soon found an Auchan hypermarket, to our delight of feeling a little bit more at home. When we got in the parking lot and saw a carwash, Vali insisted to get our cars cleaned after we do our shopping. At this point, our slowness already started to annoy me and the polish girls, but seeing ourselves in the biggest shop since Europe, made us take our time and enjoy our options, even me although I knew the pressure of time we had. A few minutes in and the polish girls really got fed up with our “Ardeal” style of moving, so they decided to leave us and continue on their own on a southern, longer route, that was already taking them along the border of Afghanistan, but it was said to be more crowded with cars, which apparently is a good indicator of a quality road when you pass through a mountain (who would have thought, right?). Seeing that we just lost one pressure point of time, we took our time to get loaded with food and Russian beers and when we got to the cars Vali refused to leave until we got them washed, in spite of the long cue and my insistent nagging of the road ahead. We do have to admit that we got great service from the guys there, took some pictures, and then left happy with our shiny, brand new 15 years old cars.

It was already around three or four in the afternoon when we left the shopping center. I was not happy. At this point in time, probably the best decision would have been to stay another day and leave in the morning but if we would have been the types of persons that took rational decisions we would not be in the rally in the first time. So we decided that we would manage the 300 KMs and the time we had left as if it was something that we could stretch and control, getting to Kalaikhum at a decent hour that would allow us to find accommodation. Kalaikhum was an important milestone in our trip because it was a small village, where our path on the Afghan border would start for a minimum of 250 KMs. With this in mind, we headed east towards Pamir and lost an additional hour in the capital’s traffic jam before finally getting some speed up on our dashboards. I was in the front, driving the Suzuki, and had no idea that I would face some of the most exciting kilometers I would ever drive. When we actually got outside the city we drove by a police check, Vali radioed me that they signaled to stop but I just did not see or understand that from the policemen so I just continued on my way. I still don’t know if Vali was joking but if any Tajik police read this, I confirm that I was ready to stop and do the traditional exchange that was needed if I would have seen the signal. Moving on our path with no police in our rearview mirrors, we were losing two things very fast, daylight and tarmac.

We were following our GPS, so we left the main road and continued on a smaller one, after a few dozen kilometers we did the exact same action, and again after some more dozens and again after a while. We soon realized that washing the cars just before leaving the city was the most useless decision of the rally, before sunset they were even dirtier than before. With the feeling of our time well invested and leaving once more the “main” road, we stopped our cars, parallel, in the middle of the road. We were looking at the old bridge that we just crossed, had some cold cola from the fridge (yes, we had luxury with us), took some pictures, and were staring at the red dust in front of us, like waiting for the start of a rally. Which we actually did… (To Be Continued)